These boots are made for walkin' 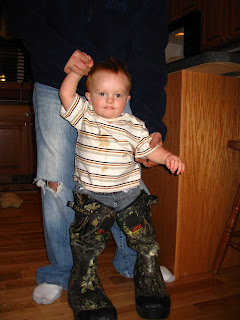 These boots are made for walkin' and one of these days these boots are going to walk all over you....at least I think? Well last night we went to Runnings because Jon wanted to get a new pair of rubber boots since his old ones are filled up with water by 10am. And let me tell you it was an interesting trip, it is like a zoo in that store. So when we got to the store we all headed back to the boot department to find some rubber boots to go over Jon's work boots. After trying on all of them he decided on a specific pair but the problem was that he could not get them over his work boots. Jon wears a size 9 and after trying on a size 12 and was still not able to get them on he started laughing and said "Amber please find me the size 9 and without laughing unbuckle the bottoms of them so I can get them on" I almost died laughing. This whole time he did not figure out he had to unbuckle the bottom buckle. (I am still laughing at him today) So once we thought we had the boot situation figured out we went for a ride in the cart to look at toys and right next to the toy aisle are little bins of real animals. All they had last night were baby ducks but holy cow did Trevor think those were cool. The whole time we stood there looking at them we would say "Quack, Quack, Quack". Then we walked a little further and there were rabbits in cages and holy smokes was that an even bigger deal. So needless to say Trevor had a good time at the zoo last night, that was all he could talk about all night long and this morning. So just when we thought we could leave and the boots where picked out we were wrong Jon found a better pair in the hunting department along with some stupid turkey video that was 3 hours long because now he is going to start turkey hunting in April (that is a whole other story in itself). So one with my story, after trying on this new pair of great boots the decision was made that those were the ones (they did not have buckles) we were off and out of the crazy store. So when we got home Trevor thought it would be a good idea to try daddy's boots on but there was one big problem they were way too big for him as you can see in this picture but he proceeded to wear them although he could not walk in them because his feet did not even reach the bottom.

Trevor needed those tall boots the day before. Then he could really get crazy in the water puddles!!