Well last night Jon was shaving and Trevor found it very interesting, he sat there the whole time and just watched every move that Jon made. Finally Jon said "Trevor do you want to shave" Trevor's response was "yeah". So Jon put shaving cream on his face and I just had to take a picture. Once the cream was on that is all Trevor wanted to do then he wiped it all off. But after I took the picture I realized that I had taken a picture like this before. After some digging I found it and wanted to post it because the picture I found was take on August 15, 2006 and the one I took last night was June 28, 2007 and it was amazing to me how much Trevor has changed since then. Have a look! (Can everyone tell how excited they were last night in the bottom picture?) 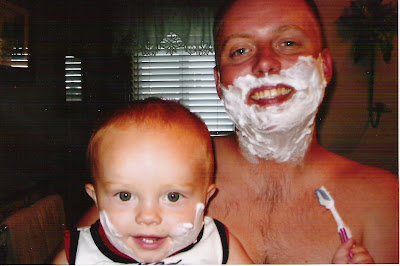 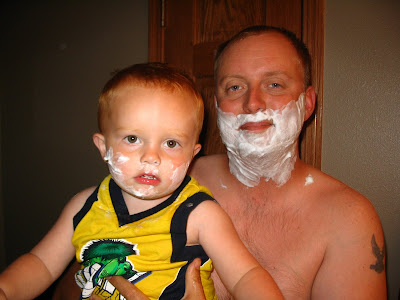 what a cute idea but they both look so tired in the new picture!
Diane

They did seem more excited the first time around! It's really fun to see the time lapse.