Another weekend gone by

Well it is yet another weekend come and gone already. Ours was pretty boring other then Jon coming home!!

Friday: Trevor and I headed out to eat with my mom, dad, Greg, Kelsi and my grandma and grandpa. Since we do not go out to eat at Toronto anymore on Friday's we have found a new place. Mom and dad have been going there for a while so I thought it was time I tried it. It is called the State Line Bar and Grill and it was really good food. I told Jon we will have to take him there next. So that's about all we did Friday and then we headed back to Brookings so Trevor could go to bed. 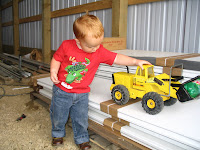 Saturday: We hung out all morning watching TV and playing trucks, then Trevor took his nap and when he woke up we headed to Hendricks since my mom and dad were going to keep him overnight so I could go to my friend's brother's wedding. When we got to Hendricks mom gave Trevor a present and it was a new pair of work boots just like grandpa Dirk and uncle Greg. Man did he think he was cool!! After his boots were on we went down to the new shed were my dad and Greg were putting up the new doors and so Trevor got right in and helped. Then he would go and move dirt with his loader that we brought down for him to play with. By the end of the night he was really dirty!! Saturday night Jon came home from Wisconsin so then we headed out to the wedding dance at the Swiftel Center, Travis Pavek (Dianna's brother) and Katie Leuning got married. It was a good time but the dance only lasted until 11pm so then Jon and I headed down town to have a few more drinks. 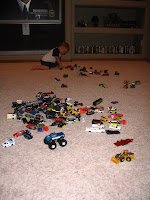 Sunday: Was all about relaxing and playing trucks!! We headed to Hendricks to pick up Trevor and the only way he would come home was if we could bring grandma Judy's trucks and tractors home and so we did!! She has a huge basket with tractors, trucks and cars in it and the minute he gets to there house he runs for the basket. So when we got home he dumped them all out and played for the rest of the day while Jon and I watched movies.

Looks like Gramma Diane and Grampa Dennis need to go shopping! Our toy tub still has baby toys in it....
Diane