Too Much to Say 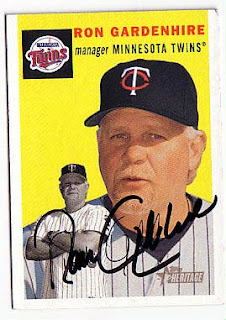 Isn't it funny how some days I can not think of a thing to post and then days like today I could write for hours!! So first of all I promised Jon I would post what he had requested. Yesterday when he was at work (still working on building 6 at Daktronics) they had a visit from Ron Gardenhire who is the Manager of the Minnesota Twins along with 2 players and another office person. He was not sure what there names where but that they were there taking a tour. I guess they are on a tour of the surrounding cities (Brookings, Marshall, SF, etc) and they made a stop at Daktronics. Jon really wanted me to post this for Grandma Mydland because he knows how much she likes the Twins!!

Second of all my post for today was going to be about Jon and his hunting trip that he is taking this weekend. He is traveling to Chamberlain with the Rost boys for the weekend and they are going coyote hunting (seriously who goes coyote hunting) it just cracks me up to listen to them talk to each other on the phone. They act like they are dating and are planning this big grand trip. So Jeremy was at our house this morning at 9:30am and they were heading out to pick up Corey. Then of course they were going to stop at Cabela's (in Mitchell, SD) since it is on the way. I sure hope they have fun freezing their butts off!

I'm not sure I understand the point of coyote hunting. What does one actually do with a dead coyote? You don't eat it, I hope!

Heck no, Jon is trying to tell me that he is going to get a big one and then we are going to stuff it and have it for decoration.....YEAH RIGHT like that is going to happen, I will give it to Amber!

Isn't that lovely? ;o)
Whatever they get their thrills off of I guess!!

You guys are just too hysterical!! As addicted as they are to hunting, isn't it great that they aren't addicted to shopping or we would really be broke!!
Diane

Gross! I will forever be skeptical of any jerkey he makes...

Glad they are having fun, but they sure picked a cold time to go hunting.