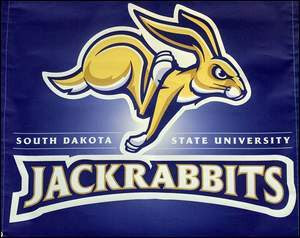 Some of you may know that the SDSU girls basketball team has won the Summit League and got a spot in the NCAA (for the first time in history)with their first game being last Sunday when they played TCU. Well they not only won that game but they tied a record that was set by Harvard in 1996 for 16 3-pointers in one game. Tonight they play again against Baylor at 8:30pm on ESPN........if you have ESPN you should watch it because it is going to be a huge game! SDSU is #7 and Baylor is #2, the game is so big that the President has canceled everything for today including a big dinner he had with us tonight to fly down to Texas to watch the game. Go Jacks!!

I was really disappointed that ESPN didn't carry Sunday's game up here. It's the only time I can remember wanting to watch sports and I couldn't!

I do hope the game vs. Baylor will be on because I would really like to watch.

What a fabulous game that was!

There are lots of people around here who were unable to get the game so I guess we were lucky!