Well this past weekend Jon ventured West to go hunting and after all that planning and money spent they did not even get 1 coyote so Jennifer do not worry about getting any coyote jerky. So the weekend for the most part was quiet but yet crazy. Friday night Trevor was not feeling good and I could tell he was getting sick because he was cranky and I could see it in his eyes so we just went out to the Syrstad's for pizza and where home early and in bed by 9pm. We did not get much sleep because he developed a bad cold and could not sleep very long because when he would lay down his nose would get stuffed up and it was hard for him to breathe so we spent most of the night sleeping in the chair. 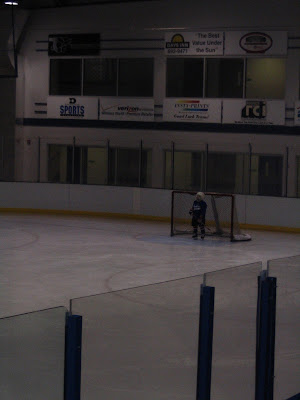 Saturday was also pretty uneventful we just sat around the house and watched movies and then Saturday night we were invited in Joel's Hockey game at the Larson Ice Arena in Brookings (he is 6 so it was really cute to watch these little bodies play Hockey). So since Trevor had never been to a Hockey game we went and had a great time. Joel did awesome and even scored a goal!! I like how they rotated the kids every 2 minutes so they all got a chance to play and they played different positions each time. (The pic above is of Joel playing goalie) Then we went to supper with Greg and Kelsi and where back home and in bed by 9pm again. It was also another venturous night because we did not get much sleep. So Sunday was spent laying around and waiting for grandma Diane, grandpa Dennis and great grandma Dottie to stop over and take us out to lunch. They passed through Brookings on their way to the airport to spend 5 days in Arizona where it is warm.....lucky ducks!! Then after Trevor's very long nap grandma Judy and grandpa Dirk came over since they had not seen him in a week they could not go any longer. But this was not the end of the day.....then daddy came home and we were very excited to see him and hear all the stories. AND THEN we were invited to the Pizza Ranch to have supper with my mom's sister Kathy and her family. The pizza was great and we had a good time seeing everyone again. Then it was home to bed. So for it being a quiet weekend it was actually crazy!!

My favorite story is about the candle party...I about lost it when all 3 of them were telling me about it!

Amber I agree with you I am very excited to see what he ordered.