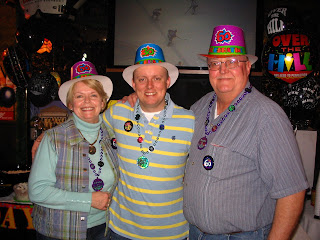 Well as most of you already know the party was a huge success!! All three of the stooges were suprised, Diane and Dennis had no idea about the party at all and Jon knew about the party but did not know that it was for him. We had a really good turn out, according to my count we went through 150 BBQ's and the keg went dry by 11pm so that means lots of people showed up. I feel so bad that a lot of the family could not make it, Jennifer and I have been planning this for over a year and we even sent out the invites a month ahead of time so people would know and arrange their schedules to make it. Who would of thought that after all of our hard work pla 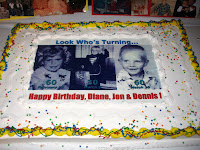 nning and making sure things were perfect that we would have the biggest snow storm of the year on the night of the party?? Because of this Jennifer was also not able to make it, she had to go through all the trouble of canceling her flight after all this time of planning. Even though the weather sucked I was still very happy that we were able to pull this whole thing off. Let me tell you, it was very hard to do!! Not being able to talk to Jon about everything that was going on was the hardest since I was so excited and worry at the same time. But overall it was a blast and I will post some pictures for all of you to see in case you missed it.

Talked to Diane yesterday. She was still so excited. The snowstorm did not help, but sounds like everyone that was able to make it had a good time. Will be looking for some pictures.