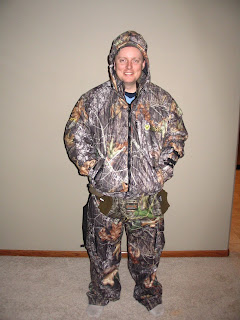 Well last night was a wild one, my mom and dad came over to Brookings to watch Trevor since he had not been feeling well so Jon and I could go to Sioux Falls to pick up some things that we have been meaning to get and also I wanted to pick up Jon's birthday present. This whole present idea came along about 6 months ago (hunting season) when we were in Scheels and Jon was in one of his moods, he was pointing out everything that he wanted to have some day. So I was taking a mental note the whole time and the next time I was there I picked out some of the things he had shown me and put them on layaway. Since his birthday is in 11 days I decided it was time to go pick up the big gift. Jon was with last night so being the observant person that he is, he saw me at the layaway counter and asked "what I was doing". I informed him I was picking up his gift, he was practically jumping up and down like a kid in 1st grade waiting for his present. So from that moment on all I heard was "come on, just tell me what it is or at least give me a hint, please"!!!! Then I finally told him I would make him a deal, I would let him have his gift ONLY if he promised me that he would put it all on and I could take a picture, he agreed! It was hilarious to watch his face when he opened it, he was so excited! He LOVED it!! So to explain what the whole gift was.......I got him a whole hunting outfit: jacket, pants, hat and a handwarmer and the best part to him was that it was a "scent blocker" outfit. This means that the animals that he goes hunting for will not be able to smell his scent. Seriously, how men like these gifts is way beyond me. But the main thing was that Jon loved his gift and it made his day, so enjoy the picture because I think it is really cute!

I'm sure it will seem like a long time until hunting season but it sure is a cute picture!
Diane

Cool! I didn't know that Jon's birthday was in February.
My birthday is tomorrow, when is his?
Happy Birthday Jon!

His birthday is March 5th