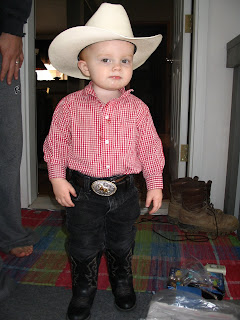 Well Saturday we got Trevor's pictures taken at Harold's. I have had this lined up for months because the whole deal was FREE. I take Trevor's old clothes that I want to sell to Kydz Planet, the last time I was in there the owner had customer appreciation day and if I brought clothes in that day I got a free session at Harold's. It was a cowboy setting and it was 15 minutes long. Trevor was a very big stinker, an hour before we had to be there we gave him some breakfast and he did not eat very well so while I was getting him dressed for the pictures Jon says "here Trevor do you want a bite of daddy's banana?" Of course he took a bite but he would not swallow it. We tried up until the last minute that we left for pictures to get him to swallow. I even tried to give me a drink of pop but nothing worked the banana was still in his mouth. So we loaded him up in the car thinking he would swallow it but no luck, we get there and took him out of the car and he still had banana in his mouth. So during the whole photo shoot he had banana i 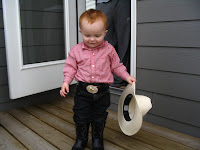 n his mouth. He never smiled showing his teeth it was just some kind of a grin. I will post pictures of the shoot once I get them but here are a few I took before we went to Harold's. Jon called him the mean old cowboy because he would not smile and we also said it looks like he has chew in his mouth because of that stupid banana.

I seriously can't stop laughing! Trevor's the cutest cowboy I've ever seen. He absolutely has the mean old cowboy look when he isn't smiling. He also looks like he's up to no good! Love it! I can't wait for more pictures. :)

Hi Amber,
That picture is just too cute! He really gets into character - doesn't he?
Diane