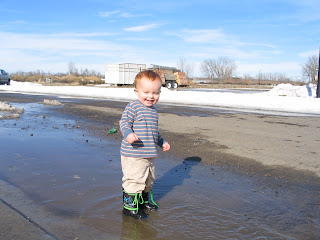 Well as most of you know, Trevor loves WATER! I am not kidding this kid is crazy when it comes to water. He loves to take a bath, after supper he is run into the bathroom and say "water, water, water". He also loves to play with it, by saying this I mean when we are at a restaurant he wants to sit and stir water in his glass with a spoon and the same goes for when he is either at grandma Judy's house or grandma Diane's house he goes right to the sink and starts yelling "water, water, water". Well the main reason for this post is to let the grandma's and whoever else know that I let Trevor play in the water on Monday night. Yes, it is true it was my idea. I am always the one to say "No, Trevor water all gone" because he always mak 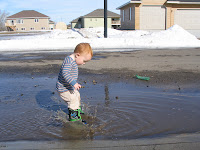 es such a mess and gets water everywhere and then he wants to do this at home which I do not like because then that is all he wants to do. So anyways, Monday night when it was so nice out I put some boots on Trevor and old pants and I let him go at it outside. It was hilarious!!! He ran from mud puddle to mud puddle, water splashing everywhere. By the time he was done he had water from head to toe! The whole time we were out there (2 hours) he had nothing but smiles all over his face and at the same time yelling "water, water, water". I am telling you this kid is crazy to love water this much.

What's up with Trevor and water? You have to bring him to Florida so he can play in the ocean!