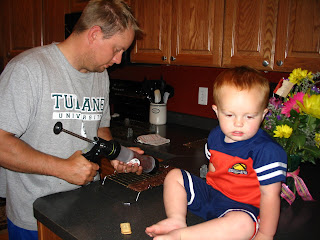 Well this weekend was very full with a million things planned. Friday night I had to work until 7pm so Jon and Trevor had sometime to hang out and do guy things. But when I got home I found out what there version of guy things was making jerky. They made all kinds from goat to antelope and let me tell you it stunk up the house. I told Jon our next house will have an oven in the garage. So then on Saturday morning I also had to work but was done by 10am and the rest of the day was for relaxing and taking naps. Saturday night we got a babysitter and went out for supper with Jeremy, Marty, Greg and Kelsey and then headed to the annual Volga street dance which was a great time. I was very proud of us because we were back home and in bed by 1am....not bad! Sunday Jon made more jerky but this time in a smoker outside and I set up Trevor's pool and worked on more laundry. After Trevor's nap we headed 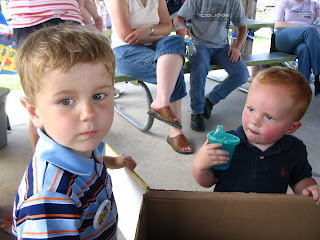 to a birthday party. Levi who is a little boy at daycare turned 3 so his birthday party was at the park which was nice so they could play on the park equipment and we could all visit. Then we headed to Hendricks to see my family where most of them were out at the lake playing in the water. So we sat around for a couple of hours and had supper, when it was time to leave Trevor threw a fit because he wanted to say with "bapa" but we were not even in the car 10 minutes and he was OUT! Overall it was a fun weekend and now it is back to boring old Monday.