3 Generations of Healy's on Father's Day 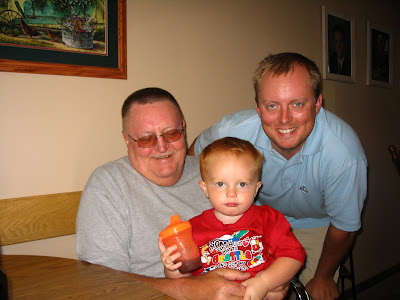 Well it was another fun and exciting father's day weekend. Friday night I had to work late so Jon and Trevor got to spend some time together, they just stayed home and played lego's until it was time to go to bed. Saturday morning yes I had to work again (this past week I put in 63 hours, its new student orientation and yes there is only one week left thank god) Jon and Trevor went to Hendricks because Jon had to make up a golf match because last Wednesday they got rained out so my mom wanted to watch Trevor. After the golf match Jon and his dad golfed around together and on hole 7 got rained on but no that did not stop them. By this time I was done with work and in Hendricks we hung around for a while and came back to Brookings because I had to yes go back to work and help with a wedding. Sunday morning we let Jon sleep in and as soon as he woke up Trevor was there with his gift which was a gift certificate to Scheel's....boring if you ask me but that is all he wanted. So we had a family breakfast together and then made our way to the grandpa's house for father's day. My mom made us lunch and my dad wanted to keep Trevor so he could also take a nap and so we headed out golfing. After that we headed to my grandpa's house and visited for a while and then went to Ivanhoe. Grandma Diane went to Seattle last week so it has been a while since she saw Trevor, it was good for them to catch up on lost time. I then talked the boys into letting me take there picture since we had 3 generations of Healy's in one house. Over all we had a great time over the weekend but it gets long going from house to house but it is all well worth it. Happy Father's Day!!

I'm glad you got this picture! It's very cute...
Diane