Swimming with my fish 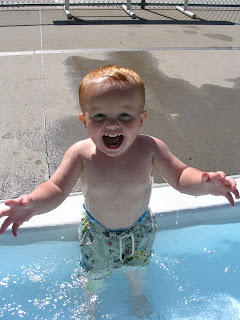 Last night I went swimming with my little fish, meaning.....I took Trevor to the pool. As soon we got out of the car Trevor took off running as fast as his little legs could run. He opened the gate to the baby pool and I am not kidding when I say....he jumped right in!!! He did not even have his shirt or shoes off. When he jumped in he went all the way under and came up and say "whooo baby" it was very cute! Then he went up to the other kids playing and said "hey wanna play water".....they looked at him like what are you saying? But then they played for a while and all had fun. We were there for over 2 hours and Jon and I still had to pull him to the car....he cried the whole time because he did not want to leave. The baby pool goes from 6 inches to 1'6" so on Trevor that would be almost to his chin. He would walk from one end to the other saying it getting deeper and deeper and deeper!! They also have a little mushroom that water comes out of the top of and squirts water everywhere, that was also a big hit. (Look at that boy smile)

Wow, I just love to read your stories and see pictures of my little sweetie!
Gramma Diney

CUTE! And he hasn't even started swimming lessons yet. You're going to have to get a pool in your back yard so he can swim every day!