It is 8pm Monday night and this is the first time I have had any time to post our weekend happenings to my blog. We had a great weekend!!! We went out to Pierre to my cousin's wedding. I was excited for more then 1 reason, first was because I have never been to Pierre before and yes it is the capital of our state but I have had no reason to go there. Second I was excited to see all my cousins I have not seen in ages. On that note my cousin who was getting married Jon has only seen twice in the eight years we have been together (crazy I know). The other part to that is Jeanine (the bride) has a sister my age and I had not seen her in 10 YEARS, how crazy is that? I saw her last at my step grandpa's funeral 10 years ago and that is when I was 16 and then we went our own ways to college and she moved to Alaska and found a guy, got married and has lived there ever since. She now is happily married and has a 14 month old daughter. Jon got to meet her for the first time so that was awesome and overall it was great to see everyone again, the weekend just fly by. It was sad to say good bye since basically we where just getting started on knowing each other again but we have planned an all cousin reunion (Yes all 60 of us) for this coming summer in a cabin at KeyStone SD on a lake......fun fun!
The wedding was very nice and very cowboy, I mean everything was cowboy to a T. The bridesmaids had nice dresses and wore cowboy boots, the groomsmen wore boots, hats and the whole nine yards. I was so busy talking with everyone I did not take as many pictures as I wanted too but did manage to get a few. So enjoy!
One more thing, since the church was right next to the capital I got to see that along with the governor's mansion and that was very cool. 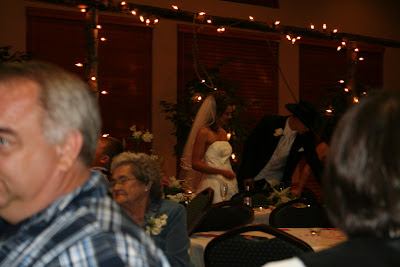 This was the best picture I could get of the couple. 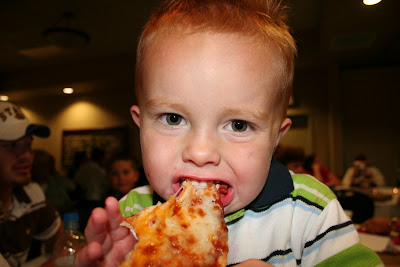 Trevor chowing down on some pizza as a snack. 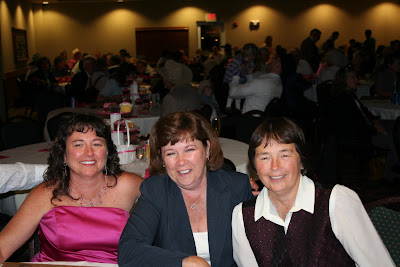 My mom and two of her sisters, Teresa on the left was a bridesmaid 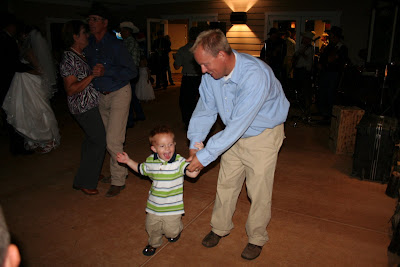 Jon and Trevor dancing up a storm 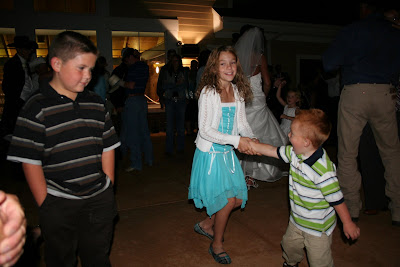 Looks like fun! I would've loved to see cowboy boots with the dresses...

Trevor - the dancing man!!! When we danced, he just wanted to go in circles - makes for a dizzy gramma!!