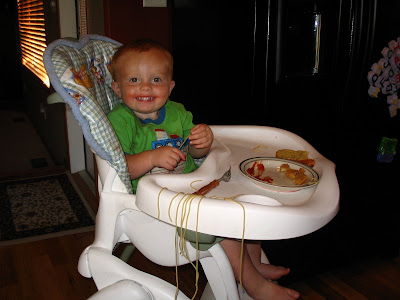 Last night at dinner I made spaghetti for Trevor and I because Jon was golfing. Trevor ate so good, a whole plate to exact. Once I was done I started cleaning up and I was not paying to much attention to him other then he was being really good just sitting in his chair. Once I realized how good he was being I noticed what he was doing.....have a look! He was taking his leftover spaghetti and hanging each individual piece over the side......isn't it amazing at what kids do sometimes!

This is also a funny from last night.......Kelsey (my brother's girlfriend) put him in the bath tub once he was done eating and he was playing in there for a really long time....like half an hour. Once he got out of the tub I was getting him dressed and he looked at me and said "mommy yucky" and showed me his hand. Then he said "wash it" I was not sure what he was getting at because his hands were squeaky clean. Then after a few minutes I realized that he was talking about the wrinkles on his hands from being in the water too long......I just started cracking up because he did not understand why those wrinkles were there. For the longest time he said "mom, come on wash".....hilarious!!

He is just too darn smart and funny...
Grammy Diney

Funny! Did he notice when the wrinkles went away? Probably on to something else by then...