Friday: Well Jon had asked me last week if I wanted to golf in couples night on Saturday night in Hendricks, I was all for it. So Friday night we went to Hendricks to practice for the big round! And Trevor spent a couple of hours with my mom and dad. When we got done golfing we went to find the 3 stogies and they were at Cindy and Danny's because they had just gone for a boat ride and they were in the process of catching frog's (Trevor thought this was a big deal)!! He had all kinds of things to tell us when we got there, like what a frog says: ribbit!! And he showed us how a frog jumps and he also said they felt "yucky"!!

Saturday: Jon worked another weekend on his side project he has been hammering 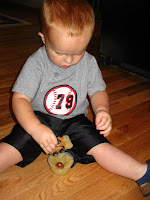 away at. I will post details and pictures when he is done. So Trevor and I hung out before we all headed back to Hendricks for golf. Well Trevor also played in the dirt with his loader on Friday night so that is all he wanted to do Saturday but we did not have any dirt. Instead I talked him into having a snack and we agreed on applesauce, I then went to put a load of laundry in the washer and I came back to him digging applesauce with his loader!! (I came back and said Trevor you little turkey, he looked at me and said "mommy is a turkey")
So after golfing 9 holes Jon and I ended up getting 3rd place out of 21 teams which is really good considering we were only 2 strokes away from 1st place...overall we had a really good time!!

Sunday: Jon worked again on his project and so Trevor and I headed to the 51st annual Pearson reunion which was held out at the wind towers. It was a good time and it was also interesting to meet a bunch of people I did not know that I was related too. By the time we got home Trevor was exhausted so we ate supper and so when Jon got home he wanted to rock him to sleep, Trevor said he was not tired but was sleeping within 10 minutes. Jon and I then decided to head to a movie and we left Greg & Kelsi in charge of the sleeping boy. We went to the 9:30pm show of "I now pronounce you Chuck and Larry" it was alright I was just thinking it would be funnier! What a crazy weekend!

Wow! You were busy! Congrats on your golf win. Chris and I want some lessons when you have time. And Chris might as well buy Jon's golf clubs. That is, if he decides he likes it!

I forgot about the clubs....yes they are still for sale and if Chris wants to take up golf then they are all his!

What a fun weekend! I think our boy is just too smart and funny - I would love to have seen him chasing frogs.
Diane