Tuesday night Ryan & Kellee Sheik called us and wanted us to meet them in Sioux Falls so we could take the kids to Gigglebee's. They are home for Polish Days this weekend and were staying at Ron and Lucy's house until today. So last night we drove down and had a great time, Kellee's parents were there along with Ron and Lucy!! Not only did Trevor and Kaden have fun but so did the adults. After filling up on pizza and holding the kids down to eat it was time to play games. Believe it or not Trevor was more concerned about the "bunny" the raccoon that drives around and delivers your pizza. But once we showed him the games there was no stopping him. He had a great time and did not want to leave. Once the boys had there fun the adults decided to play laser tag in the basement, Ryan and Kellee had done this before and said it was fun so we thought we would give it a try and it was awesome!! You paid $4 and you got to play for 10 minutes so Jon, Ryan, Kellee and Kellee's brother and I played. It was tons of fun but by the time we were done we knew we were getting old because all of us were really sweating! Then we went to Ron and Lucy's house and played bean bags and had a few beers!! It was a great time and thanks Ryan and Kellee for inviting us! 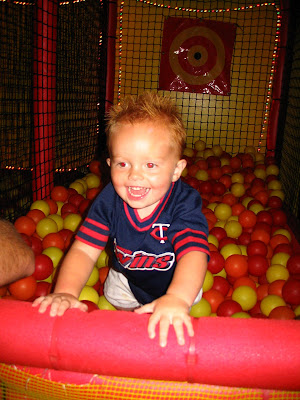 Trevor loved playing in the cage full of balls (can you tell?) 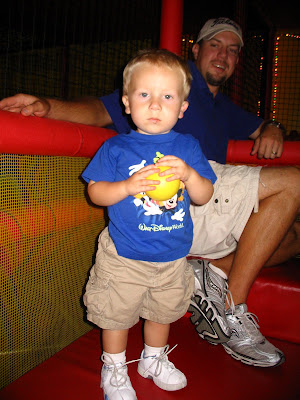 Kaden does not know what to think of me 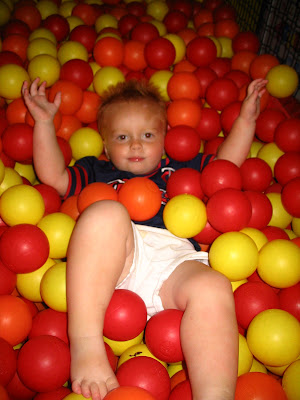 The dad's teaching their son's how to drive a motorcycle 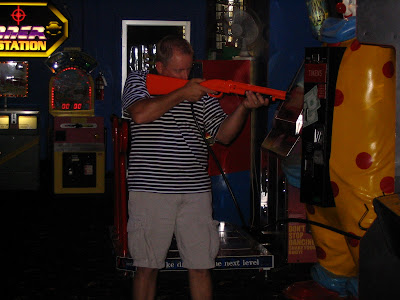 Isn't Gigglebee's for little boys that want to play games?

Gosh, that looks like fun! I'm sure Ron & Lucy were so thrilled to have the kids staying with them...
Diane