Well with everything that has happened over the past 6 days I am not even sure where to start. First of all I went to Wal-Mart yesterday and bought a new card reader so you all can enjoy the weekend in pictures. So here is goes!!

Wednesday night we let for Langford because it was Blair and Yvonne's 25th Wedding Anniversary party. It was nice to see everyone again since the last time we at the lake. Even though it was a great time I headed to bed early with Trevor because I knew we had a big weekend to get through so not a lot of excitement for me.

Thursday we woke up and headed to Aberdeen for Thanksgiving at Reed and Deanna's. Minutes after we drove into the driveway Trevor spotted some of Reed's big equipment (2 big dozers) we went into the house to say HI to everyone but Trevor did not stay long because him and dad headed out to see the big machines. We finally got him to come inside to eat a huge Thanksgiving meal (Deanna it was awesome) we had the whole traditional meal....very yummy! Then Trevor found a new friend to play with, Sara! They played on the floor for a long time and then it was out to see all the big machines I have tons of pictures so I hope you enjoy them. Then around supper time we headed to Roslyn to see grandma Dottie and the Mydland side and then had supper with them. By this time I was stuffed and very miserable! After visiting we let Trevor in Roslyn with grandma and grandpa and Jon, Jack and I headed back to Langford to Eclipse and some drinking.....it was a great time!!

Friday of course was black Friday so we where up and at it and off to Aberdeen to do some shopping. In the meantime we decided to leave Trevor with Jon because they where going pheasant hunting. Thinking they would quit early and all take naps well I was wrong!! Trevor was a rockstar and hunted all day long. He never complained once and when they would shoot a pheasant he would run and get it and bring it back to the truck. I myself am very shocked, I took pictures to prove it. Did I mention he went without a nap, this is a big deal for him. If you ask him what he did for Thanksgiving he will say "I went hunting with my daddy".

Saturday we headed home and decided to stop in Hendricks because Santa was going to be there but when we pulled into town they were starting the fish house parade......yes that is right a fish house parade. Trevor quickly got out of the car and rode with my dad in his pick-up, Greg had his fish house and Danny was pulling Jon's. So we ended up staying in Hendricks until 5pm and then headed home and spent all of Sunday just relaxing from our wild and crazy weekend.

I also wanted to show this picture because it cracks me up!~ This was Trevor on Saturday when we got home, this is what he did the rest of the night he did not move!! 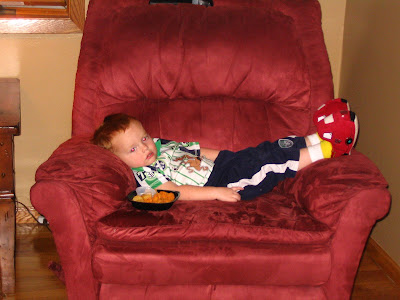 What a fun weekend! These are great pictures - I forgot to tell you that when he was "working" on the floor with Angie he was calling it "homework"!
Diane