Alright so those of you who know Jon know that he never complains about anything unless it is really bad. For example we have been together for many years and I have only had to take him to the hospital once and that was for a kidney stone. So Sunday he started complaining that his big toe was hurting him and I just laughed and said quit wining you probably just stubbed it.....he laughed and said yeah you are probably right.

So as the night went on he said you know that is really hurting do you think I might of done something to it. My response was "no" we have not done anything all weekend but sit here. So Sunday night he could not sleep because it hurt and he woke up and iced this foot and said it felt better. So yesterday morning he said it was still hurting so I talked him into going to the doctor to get it checked out, he agreed....this never happens so I knew something was wrong.
After a trip to the doctor he found out that he may have "gout" in his big toe. For those of you who have never heard of it well here you go:
What is gout?
Gout is condition that results from crystals of uric acid depositing in tissues of the body. Gout is characterized by an overload of uric acid in the body and recurring attacks of joint inflammation (arthritis). Chronic gout can lead to deposits of hard lumps of uric acid in and around the joints, decreased kidney function, and kidney stones. Gouty arthritis is usually an extremely painful attack with a rapid onset of joint inflammation.
The doctor gave him a perscription to help move the acid and to releave some pressure. His toe looks really funny because there is a big bump on the side of it as you will see in the picture. 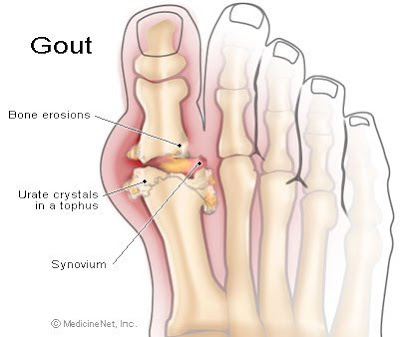 I thought that just old people got gout...Does that mean that Jon is getting old?
My grandpa always use to get it when he ate too much pork. HA!

Yes this means Jon is getting old. And the more research I am doing the more I am finding out that yes it does depend on what you eat. Anything with acid in it is bad for you and caused gout....gravy, broccoli and califlower.

Poor Jon - he might just need to stay off of his feet for awhile! I think they used to refer to gout as the king's disease because it is irritated by rich foods - you've been feeding him too well!
Diane

Interesting that he's also had a kidney stone and that's associated with gout. Sounds painful - I will keep the weekend menu low in acid. Although I can't do much about the beer. ;)

I sure can do something about the beer.....tell him you are out and no one is drinking! Yeah Right!